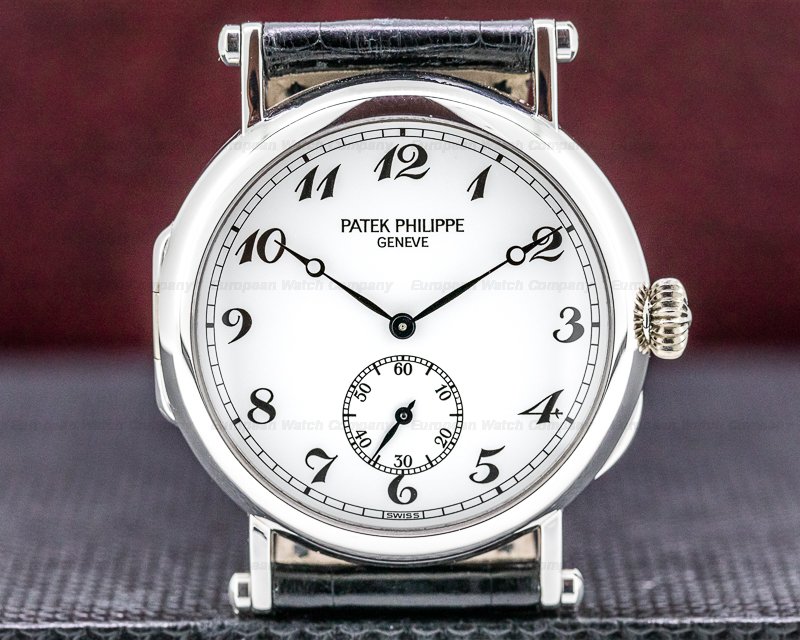 This is a 1989 18K white gold Patek Philippe Calatrava Officers for the 150th Anniversary of Patek Philippe 3960G. It has an alligator strap with an 18k white gold tang officers buckle, and a scratch resistant sapphire crystal. It has an onion-shaped signed winding crown, and there is a solid half hunter officer case back engraved with ""PATEK PHILIPPE – GENEVE - 150TH ANNIVERSARY 1839-1989," and a serial number. The polished inside back of the half-hunter case has hallmarks. The 33mm diameter solid round two-body case, curved screwed lugs and bars, and convex bezel, are polished. The dial is white porcelain with Black Breguet Arabic numeral hour markers surrounded by a black railway-style minute scale. It includes blued Breguet hour and minute hands, and there is a white subsidiary dial at the 6 o'clock position for the constant small running seconds with a black railway-style scale ring, Arabic numerals, and a blued dauphine indicator hand. It includes a Certified Official Superlative Chronometer (COSC) rating. It has a 44-hour power reserve at full winding, it's water resistant to 30 meters/100 feet, and the 8mm thick case, dial, and movement are all signed. This Patek Philippe Calatrava Officers for the 150th Anniversary of Patek Philippe 3960G has a mechanical manual winding Patek Philippe caliber 215 movement that's rhodium plated with Cotes de Geneve embellishment. It is stamped with the quality mark of the Seal of Geneva, and it includes 18 jewels, 130 components, 5 bridges, a straight-line lever escapement, and the patented Patek Gyromax balance adjusted to cold, heat, isochronism, and 5 positions. It has a shock absorber and a self-compensating free-sprung Spiromax flat balance spring. The leather band has a matching 18K yellow gold buckle, and the case, dial, and movement are all signed. The mechanism oscillates at a frequency of 28,800 vph (4 Hz). This Patek Philippe Calatrava Officers for the 150th Anniversary of Patek Philippe 3960G full set was one of the special editions that debuted to mark the 150th anniversary of the company in 1989. This watch was made in an edition of 2,200 examples. It includes the original certificates with the limited series attestation, the original coffin-shaped box, and the commemorative coin. 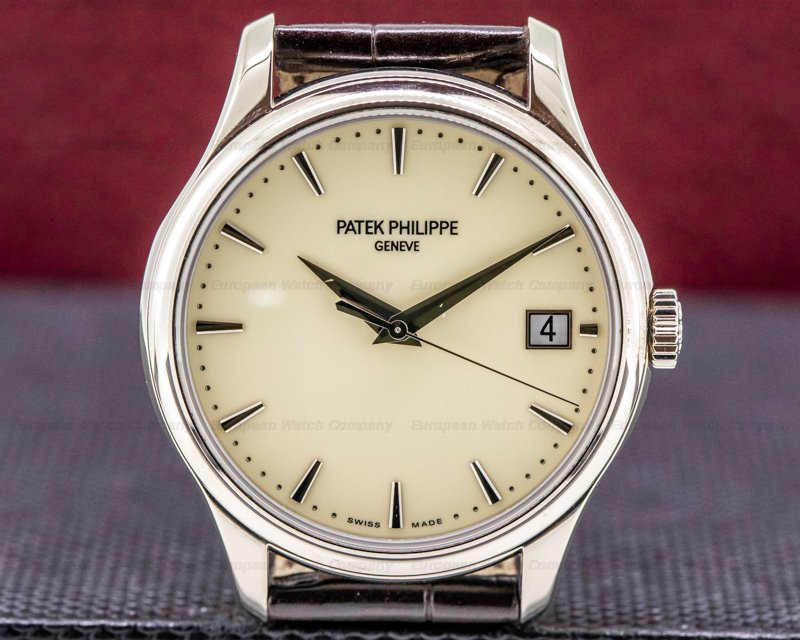 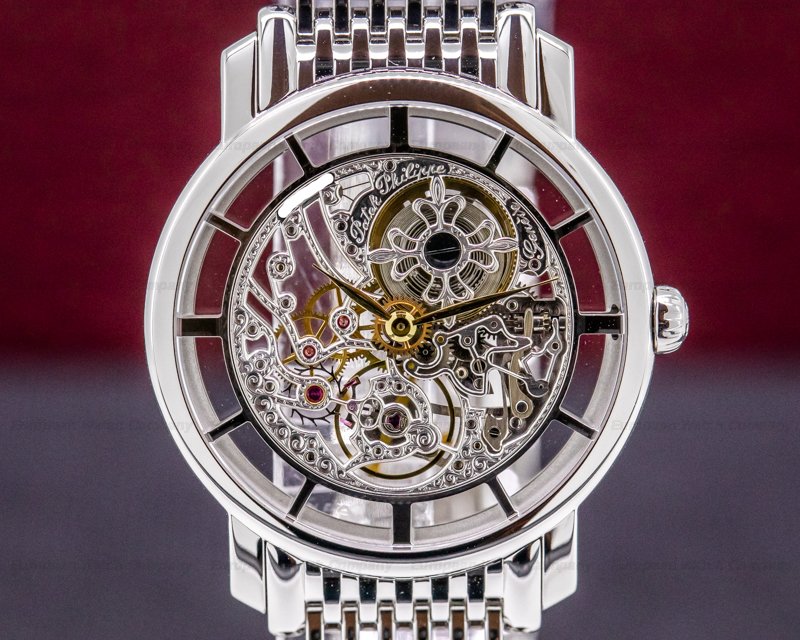 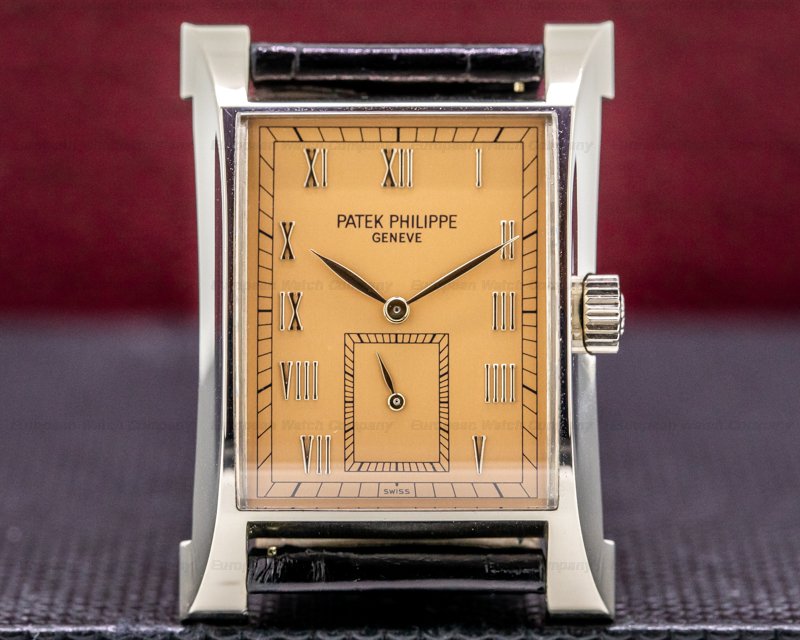 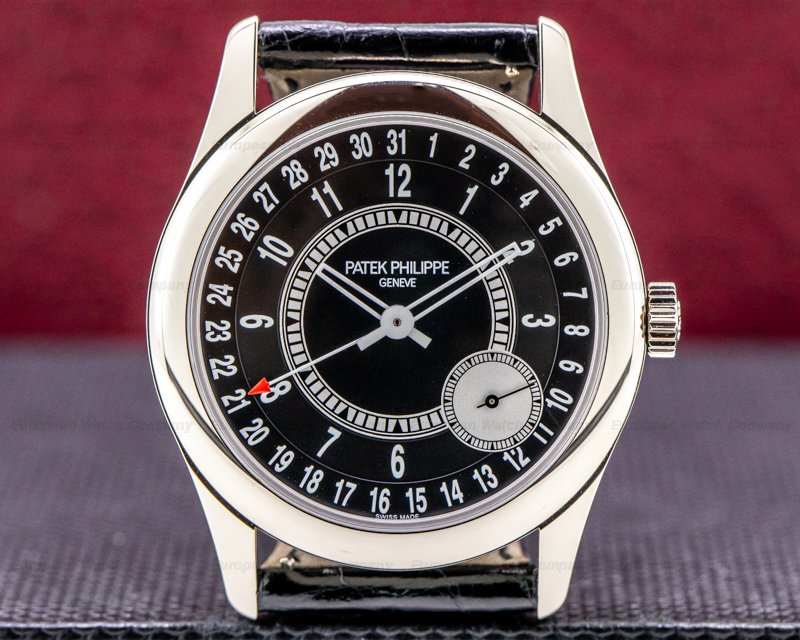 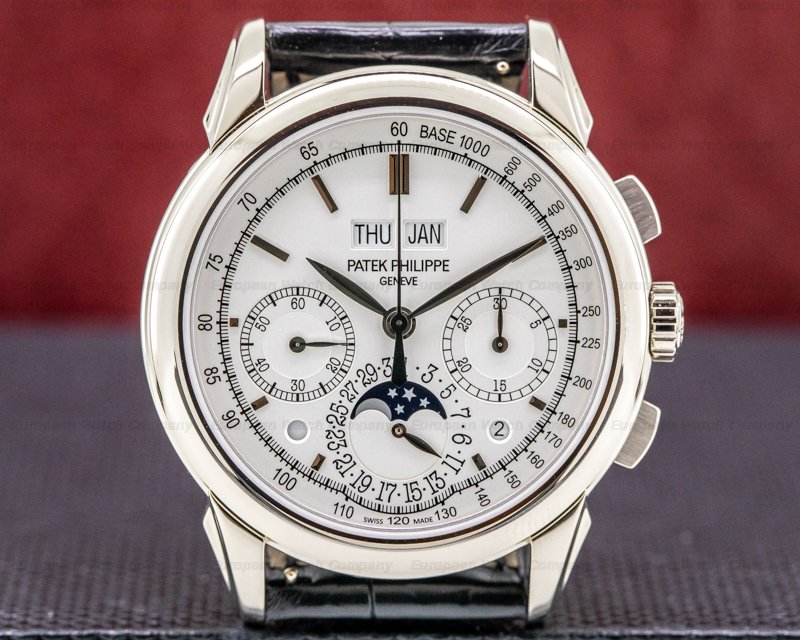 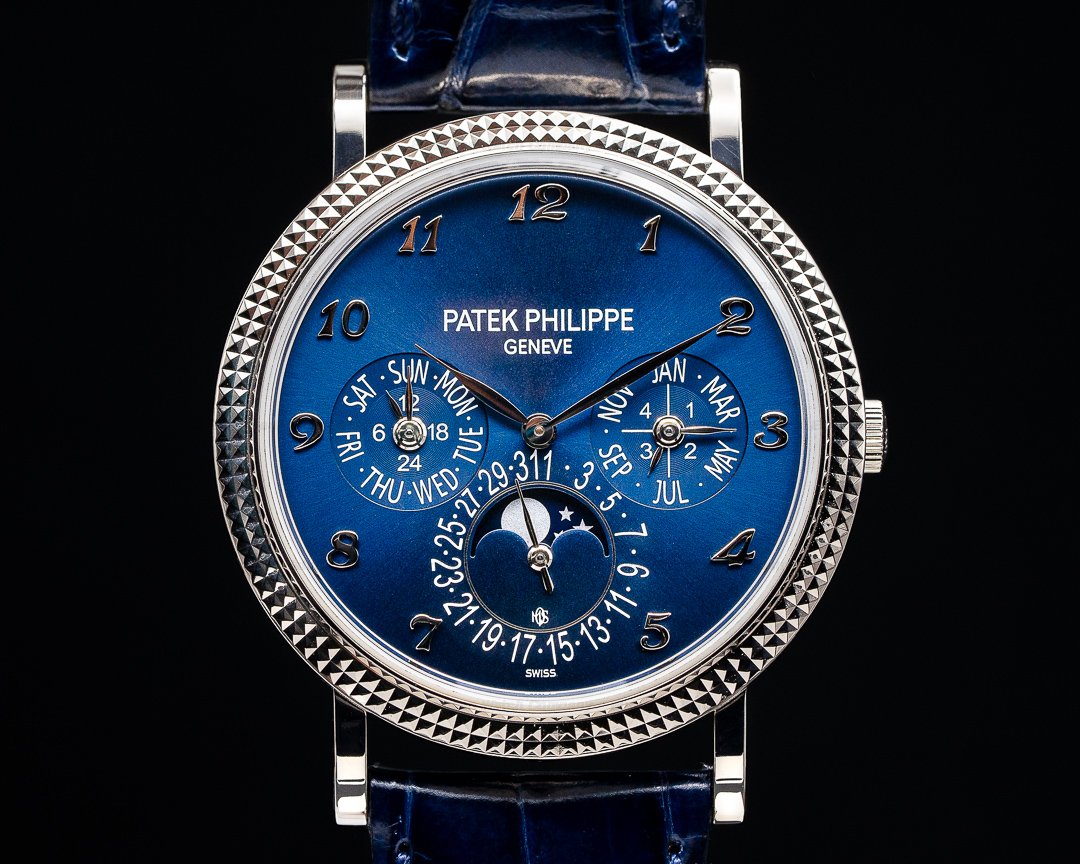 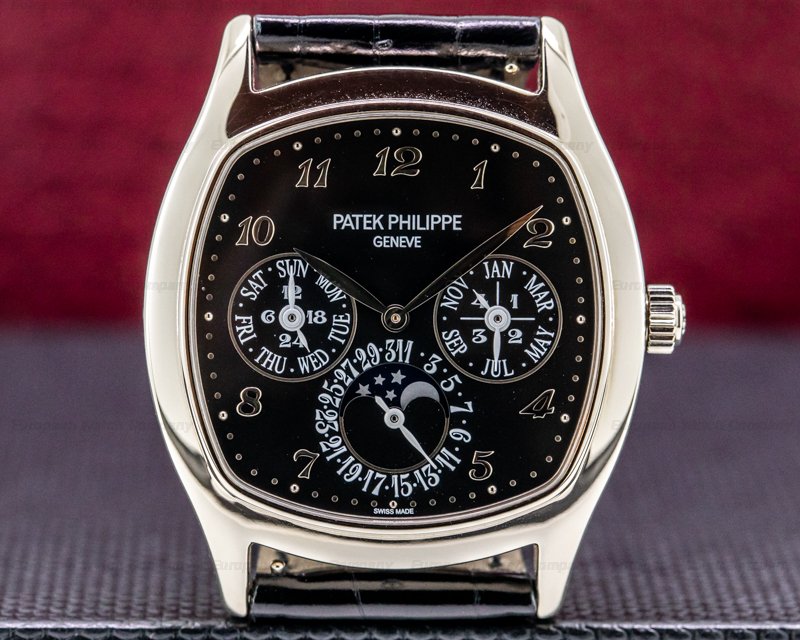 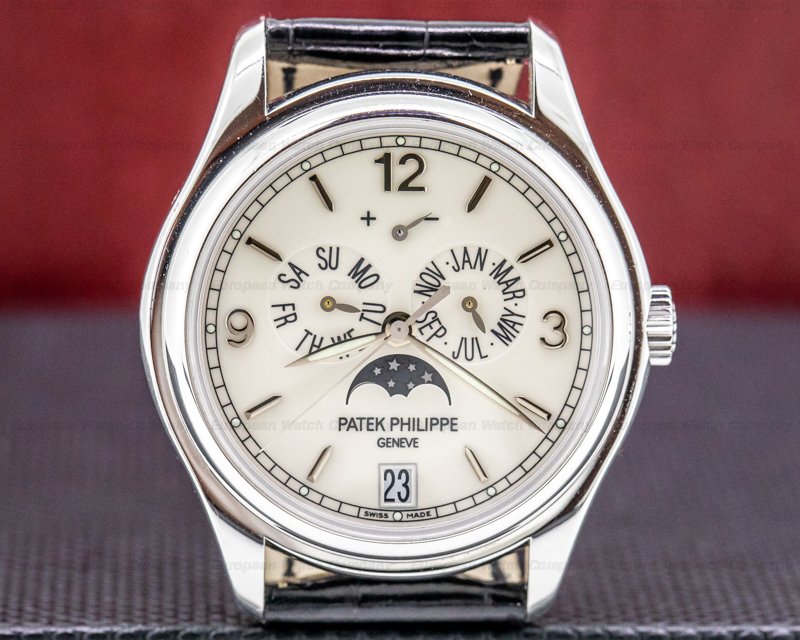 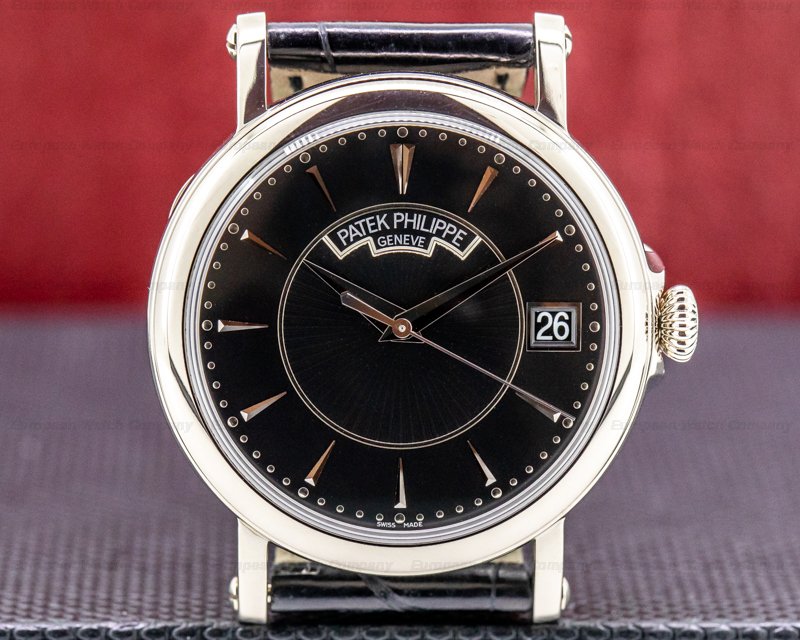 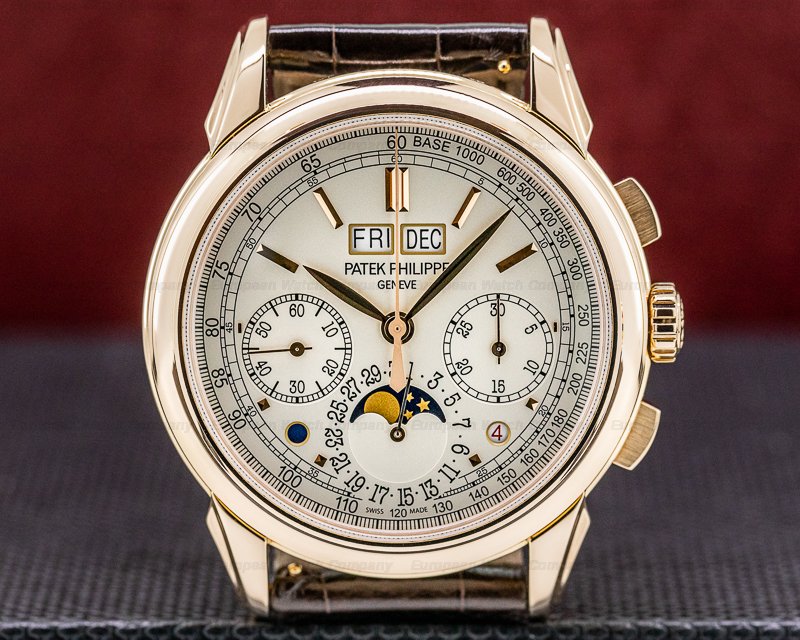